Rajendra Chola – I sat on the Chola throne for the first time as yuvaraja, the crown prince, under his father’s rule. He inherited a mighty empire from his father, Rajaraja Chola – I. Along with the empire, he also inherited his father’s wars. The Chola empire was plagued by wars and rebellions. In the North, they were at war with Kalingas, the Western Chalukas and the Eastern Chalukas. In the South, their archenemies, the Pandayas were a splinter on the throne. Even in Lanka, which his father had recently occupied, the Sinhalese king was fighting for his freedom. The yuvaraja rose to the challenge. He took command of the Chola Army. The Chola Army crushed all the rebels under his leadership. The Chola flag, a pouncing tiger, fluttered in Maharashtra, Karnataka, Kalinga, and Lanka.

When the yuvaraja wore the Chola crown in 1014 AD, he was the ruler over the entire Deccan. His navy held the Islands of Andaman and Nicobar Islands. In his treasure chambers were the crowns of the Pandayas and the Sinhalese. The young Chola king was not satisfied. The minstrels sang of his father, Rajaraja Chola, and called him the greatest Chola king. The Chola Temple in Thanjavur was a testament to his greatness. But Rajendra Chola had different plans. Plans to overshadow even his late father’s glory.

The river Cauvery was the Chola lifeline. It flowed through the heart of their empire, the city of Thanjavur. The Temple that his father built towered high over the city skyline. Priests, ministers, and bureaucrats walked hurriedly through the wide streets. The city was his father’s pet project. The Chola port, Kaveripattinam, was situated at the mouth of the river Cauvery. It brought merchants from all over the world. Fair skinned Romans, bearded Arabs and diminutive Chinese strolled on the dusty the streets, selling their merchandise. Trade flourished under the Cholas. The Chola Empire was at peace. But the young Chola king grew restless. He wanted more. He wanted the holiest of all rivers. The Ganges.

He set his eyes North. The king commanded the army himself. Under king Rajendra Chola and his General Araiyan Rajarajan, the Chola army laid waste to the land. The Kalingas, the Vengi and the Odda kingdom fell before the Chola might. The only the Pala kingdom stood between the Chola and the Ganges. In one of the bloodiest wars of that time, Rajendra Chola‘s army defeated the Palas and king Mahipala lay his crown at the young king’s feet. Rajendra Chola, tired from the battle, walked into the river Ganges. The current was strong but the Chola was not bothered. He cupped his hands poured the water of the Ganges as a sacrifice to Lord Shiva, his protector. He took on the title – ‘Gangaikonda Chola’, the Chola who brought home the Ganges.

With the Bengal under him, Rajendra Chola looked east. He had heard tales from the merchants of Kaveripattinam of vast lands over the sea, filled with riches. He strengthened his Navy and sent it on an expedition to conquer the lands of the east. The Chola Navy did not disappoint their king. They proved to be the strongest naval force in the Indian Ocean. The kings of Burma, Indochina, Malay Peninsula, and the Indonesian Archipelago accepted the Cholas as their overlord. They sent tribute to the king, under the naval threat. All land around the Bay of Bengal belonged to the Cholas. During Rajendra Chola‘s rule, the Bay of Bengal was called ‘The Chola Lake‘.

At the height of Rajendra Chola’s power, The Chola Empire held its sway over the Deccan, Bengal, Burma, Indochina, Malay Peninsula, Singapore, Andaman-Nicobar Islands, Lakshadweep Islands, Maldives and Sri Lanka, making it one of the largest empires to ever rule India.

He named his son, Rajadhiraja Chola, as ‘yuvaraja’ and placed him on the Chola throne. He renounced the throne and took up the life of a hermit. He left Gangaikonda Cholapuram and spent their last days as ascetics at Bramhadesam on the banks of Palar with his wife, Viramadeviyar. He died at Bramhadesam at the ripe age of eighty. The queen committed sati on his pyre. The queen’s brother, Madhurantakan Parakesari velan, the commander of the Chola armies, built a watershed at the place in memory of his sister and the greatest king of South India.

The glory of Rajendra Chola’s city, Gangaikonda Cholapuram is now all but lost. The once mighty Chola capital is now a small village situated on the highway between Neyveli and Kumbakonam. The Royal palace, the city buildings are all one with the dust. The only proof that the place was once the capital of one of the might Chola Empire are the Shiva temple and man-made lake nearby.

The Shiva temple is built along the lines of the one in Thanjavur. One of the most beautiful sculptures adoring the wall is the one of Shiva placing a crown on the King’s head. Clean lawns surround the temple premises. The place is now a world heritage site and thankfully the city of one of the greatest kings of India is not completely lost in the tides of time. 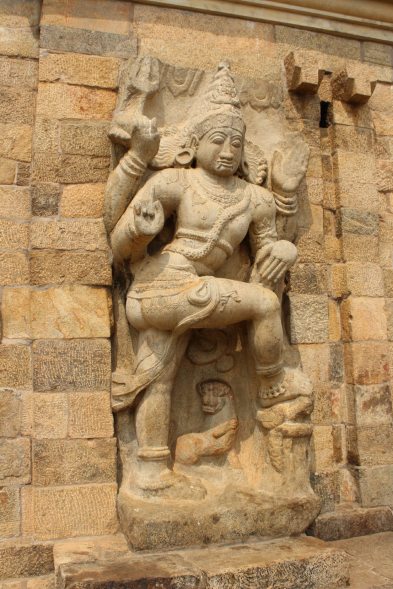 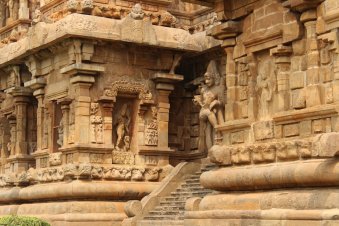 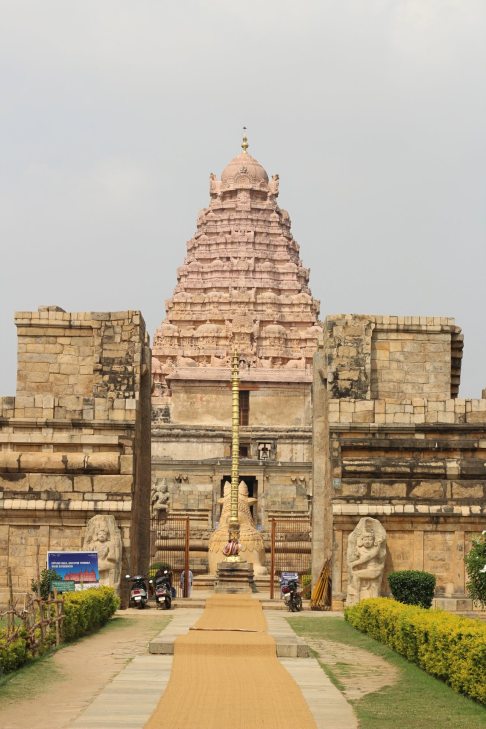 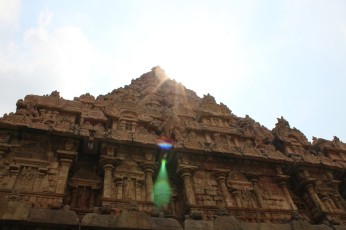 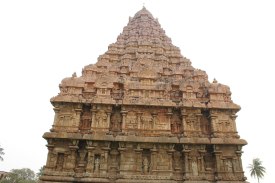 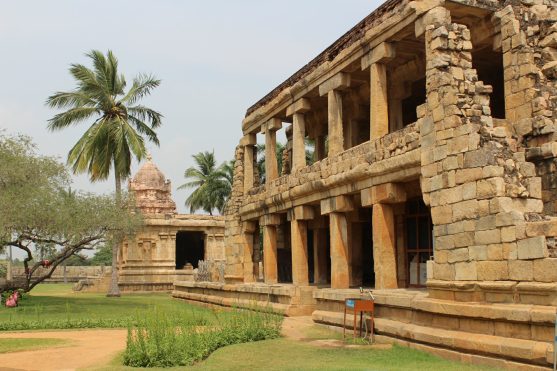 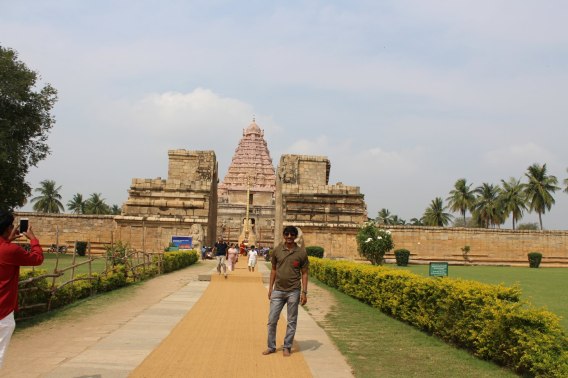 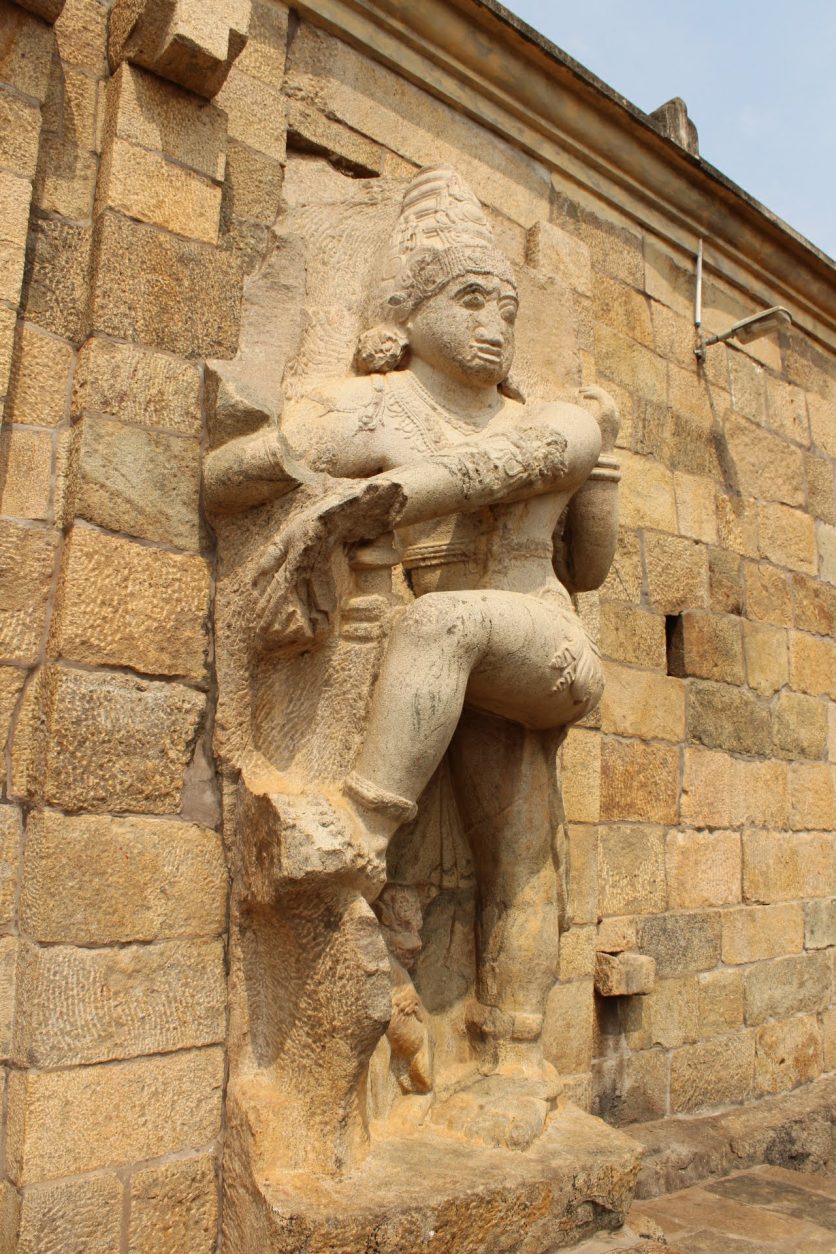 7 thoughts on “‘Gangaikonda Cholapuram’ – The City of the Chola who brought the Ganges.”